Infinity Minus One Possibilities

Career changes come in different forms, some of which are more socially acceptable than others. For example, you find a new job and call the break between jobs “funemployment.” It’s safe; you figured out the next steps and arranged to take a break. It appears to be the most socially acceptable style. Although less common, it is also socially okay to quit your job, take a break for a few months, and explore new opportunities. In terms of acceptance levels, though, it falls slightly behind funemployment. But one of the less socially acceptable styles is for someone to part ways on their employer’s terms and then take the time to explore possibilities. My recent departure from my prior employer fell into the latter category. There it is. 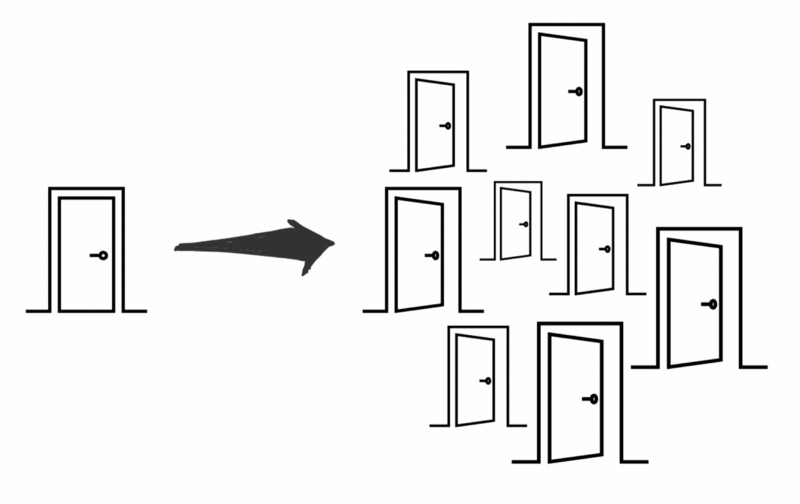 My situation is not unique — many people go through such career-changing events with far worse ramifications. I have the luxury of time and space to write about it and some friends and family to lean on. Yet, here is why I’m writing this article.

First, I have a choice to make. I can stay ambivalent about my departure and imply that I chose to depart without saying so clearly. I could even call it funemployment. Alternatively, I could choose to acknowledge that the choice was not mine, and yet I’m genuinely curious about what lies ahead. I’m choosing to go with the latter option to face myself with clarity and remove any ambivalence from my mind. You might say that it takes courage to do so, but I think it opens more doors.

Second, I want to break the stereotype that such breakups are bad. I want to highlight that it is perfectly okay to acknowledge such a change and then operate from the point of strength and not weakness.

Third, I’m sharing the mental models I used to process the change, which may be of value to others. Once I realized what was happening, I struggled over a weekend to regain my equilibrium. I concluded that what happened was a gift for me to explore possibilities that I may have been ignoring. But that conclusion was not instantaneous — some mental wrangling preceded it.

Over the last several years, I’ve been fascinated with the idea of playing with different mental models to influence how you feel about and react to events around you. For me, this is a way of building resilience and agility. I’ve been able to apply this technique to address several ambiguous technical and leadership problems when I felt stuck or noticed others stuck. I got out of difficult situations with more than one possible option when no option seemed to exist. If there is only one thing I could take away from my last job, it’s learning this ability and applying it at scale.

I think of a mental model as a pair of tinted sunglasses. You swap one pair with another with a different tint, and the world looks different.

As Lisa Feldman Barrett says in her 7½ Lessons About the Brain, “we all live in a world of social reality that exists only in our human brains.” This social reality is neither innate in our minds nor fixed. She adds that we “create the social reality with other people without even trying because we have human brains.” Per her research, one way to create the social reality is by “reliably copying one another to establish laws and norms to live in harmony.” In other words, we seem to learn about how we feel about events around us from others. We copy both the useful and not so useful mental models from others.

Thanks to such copying, in most cultures, we default to mental models like below when faced with such situations.

These are some examples, and there can be more. All such models seem valid and justifiable. You may vacillate between these models to feel discouraged, helpless, angry, confused, etc., for a while. Depending on the culture you grew up in, and the traits learned in life, you may go through these for minutes, days, or even weeks.

Unfortunately, such mental models do nothing but close doors for future possibilities. They make us stuck in the past and make us carry that burden into the future. But it does not take much to find that you can form a different social reality with a different set of mental models.

Unlike the first set of models, these models create a different social reality in which you don’t glue yourself to the past but are genuinely curious and excited about what lies ahead.

But discovering such alternative models can be challenging, particularly when emotions due to the first set of models overtake you. Most of the difficulty is being aware of the mental models you’re currently using. It takes practice to remind yourself that there are other mental models to explore. For me, journaling helps.

When things happen, you get to choose — entertain mental models that close doors or only consider mental models that open new doors. You can choose to carry the burden of the past or choose to be present, enjoy the moment, and build for the future. One weakens your backbone with the weight of the history — the other strengthens your spine for the next phase. When putting this way, the choice is simple. The faster you become aware of this choice, the better for you. That’s the gist of what I learned over time at work.

In the end, you might ask if I’m spinning a negative into a positive story and rationalize. Yes, that’s the point of choosing alternative mental models to aim for the outcomes you want. Our social reality is malleable. Conditioning the mind is an essential element in life to improve resilience. It involves picking up mental models that work for you and discarding those that don’t. I could not have gotten certain things done in my career if I hadn’t taken that approach, and I know it is valid for millions of others. That’s the ability I’m taking with me to explore possibilities.