It is not often you get an opportunity to study an incident to illustrate a few lessons. A recent incident that I describe below teaches three key lessons:

Below is an approximate representation of the incident timeline with certain notable events. I’ve omitted a few partially explored parallel paths. 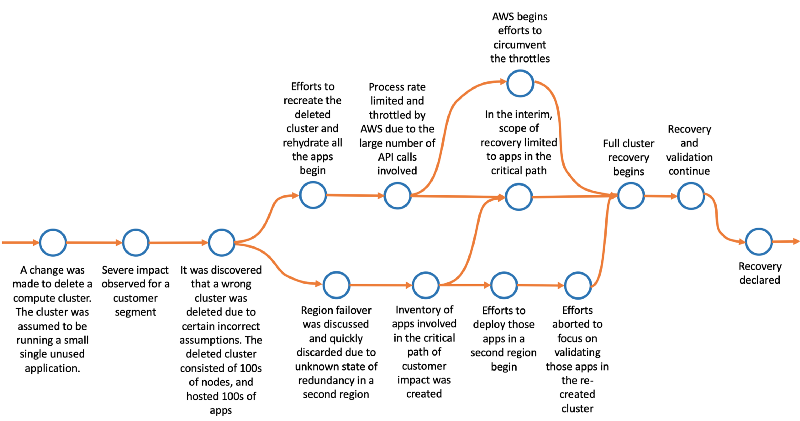 First, notice that there are at least four separate perspectives of this incident.

Team A that operates the shared compute cluster:

Team B that owns the apps in the critical path:

“They (team A) did what? How could they? … Can we bring up these apps quickly in the second region? … Who knows the steps? … Who do we need to verify?”

“They (team A) did what? How could they? … How do we (recover from the throttle)? … What is the risk to other consumers of those APIs? …”

Team D that is orchestrating the events on the incident bridge:

“How is the rest of the site doing? What else went wrong? … Can we shift traffic to the other region? Why not? Have we tested this before? … Do we have a list of apps running on that cluster? … Who do we need to call?”

Such perspectives show that the narrative of the postmortem report can vary based on who is writing the postmortem. Collecting all these perspectives, reconstructing the incident, and identifying potential corrective actions, may take separate interviews with each group. A single live large gathering of all the parties involved in a post-incident review meeting may not uncover all these perspectives. A typical operational review with a senior titled person at the head of the table will undoubtedly miss most of these perspectives, and the discussion will most likely focus on what that person feels everyone should do.

A common practice of conducting incident postmortems to ask “what went wrong,” then a series of whys to find what that happened, and then identify future corrective actions to prevent such an incident from reoccurring.

Consequently, you would identify potential corrective actions like the following:

However, asking for “what went well and how” would uncover a different set of events and potential corrective actions.

Recall from the timeline that the deleted cluster was hosting 100s of applications, most of which were customer critical. But why was impact not broader than noticed? What protected the rest? This line of questioning would uncover the following:

In other words, a certain amount of robustness was built into the architecture, which helped limit the impact.

You would then come up with a different set of action items from those identified in the “what went wrong” approach.

This example shows that probing for both “what went wrong” and “what went well and how” are essential. Each contributes to improving your understanding of the complexity of the system, how things work and identify potential corrective actions. Extending this line of thinking to all the perspectives listed in the previous section further enriches this understanding.

Resilience is What People do

Finally, this incident also illustrates that resilience is what people do. This incident involved opening up minds to alternative explanations, conducting parallel streams of analyses, adapting to new information as it emerged, and attempting things not done before. Each major component involved in this incident behaved as it was supposed to. Regardless, the system as a whole faced a catastrophe, and it took human coordination, quick thinking, and ingenuity to recover from the disaster. In fact, what is typical between incidents is how people come together to restore the system, with the rest being unique to each incident.

Though such a distinction between robustness and resilience seems nuanced and pedantic, understanding and appreciating the difference can lead to vastly different thinking, investments, and outcomes. For example, not recognizing this difference may limit you to only focus on software solutions like below.

These are all essential investments. But such steps alone will not let the overall system, which includes people, the tools they use, and the rituals they follow, build the capacity to adapt to changing conditions during a catastrophe and to learn from those conditions. You need to go beyond to include the following to build resilience.

For any company generating value from its production systems, complexity is a moat. Despite our attempts to shuffle the complexity through automated layers of abstractions, complexity is the natural state of real-world systems. Each layer we add and each change we make change our assumptions about how the system is supposed to work, and how it is actually working. Incidents provide an excellent opportunity to validate those assumptions and discover ways to improve. The practice of continuous learning from incidents must be an integral part of your operations-culture to build resiliency.

Thanks to Willie Wheeler for reviewing an earlier draft of this post.