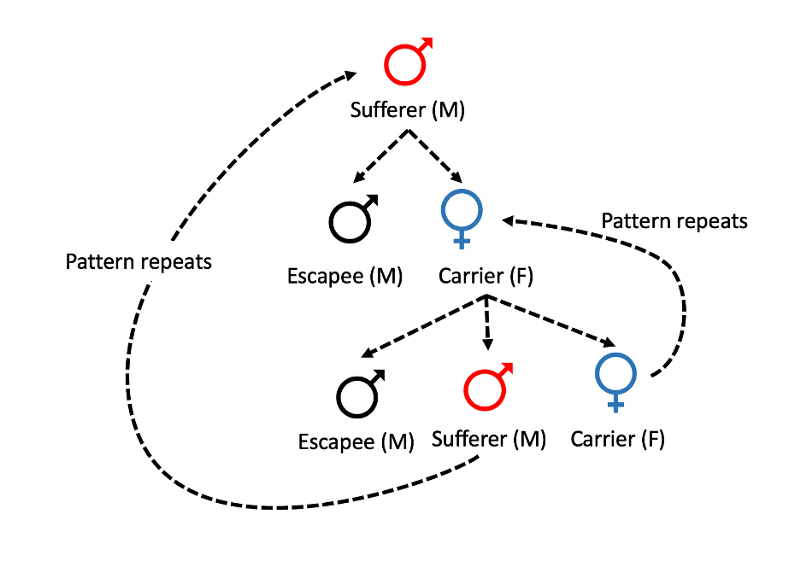 Retinitis Pigmentosa is such a genetic disorder that causes gradual loss of vision. There are three known variants of this disorder, one of which is transmitted from generation to generation through X-linked chromosomes. This X-linked variant exhibits the pattern I described above. My description of this pattern is based on empirical observations and is not scientific.

That’s what has been ailing our family tree for generations. No, I’m not suffering from this, because I’m the male child born to a sufferer. My father is a sufferer who lost his vision during his 30s and yet managed to have a rewarding career teaching accounting for undergrads until his retirement. He relied on the family to read from books, and to prepare lecture notes.

What’s even more astonishing is the story of one of my ancestors, Chilakamarti Lakshmi Narasimham, born in 1867. He writes in his autobiography that he had difficultly reading in school or playing in low light in his childhood, and lost his vision entirely during his adulthood. Yet, he lived an active life as a prolific playwright and novelist in the Telugu language. He was also a social reformer and was active in the movement for India’s freedom from the British. He wrote several original plays, stories, and novels. He even started and ran magazines and translated plays from Sanskrit. He wrote his autobiography, published in 1942, at the age of 75 by dictating the text to two scribes. His books are bought and read even today.

I came upon his autobiography just this week. While reading this book, I learned that his maternal grandfather, who was not born blind, also gradually lost vision by his mid-30s. This finding puts the earliest occurrence of this disorder in our family tree in the early 1800s. Any documented or oral evidence of this disorder beyond this is likely lost. Even my father didn’t know that his ailment is a genetic disorder until the 1990s. Most doctors he saw treated him for Myopia (nearsightedness).

There is still no cure for this, other than a carrier female deciding not to have children. Prospective experimental treatments cost a lot and are accessible to just a few.

In the era of plentiful of platitudes, it is easy to say that, despite such disorders, you can still accomplish a lot in your life. My father’s resilience is an example. Yet, having watched several sufferers (my father and his brothers), I know that life without vision is tough. The rest of us who can see don’t exactly make it easy for those who cannot see.