Taming the Rate of Change

These are great times for pushing code to production. Thanks to the cloud, micro-services, and investments in CI/CD pipelines, teams that used to release code once or twice a month to production until a few years ago are now introducing production changes several times a day.

For example, at the Expedia Group, which is where I work, we are witnessing a significant increase in change frequency (number of production changes a day), with change lead time (from committing code to a successful production deployment) for most changes in minutes. See the chart below that shows change frequency over the last two years.

As the 2018 State of DevOps report says,

Those that develop and deliver quickly are better able to experiment with ways to increase customer adoption and satisfaction, pivot when necessary, and keep up with compliance and regulatory demands.

Update: See my later article Incidents — Trends from the Trenches for more evidence. My analysis of several hundred production incidents shows that change is the top trigger behind incidents.

Based on metrics for deployments (first two rows in the table below) and stability (third and fourth rows), the DevOps Report also categories teams into the elite, high, medium, and low performance. Once you start investing in micro-services and CI/CD, teams move from low/medium performance to high/elite performance based on deployment metrics.

However, a similar transition based on stability metrics is not automatic. Why so?

This question has no simple answer. Chaos people offer that continual chaos testing will help surface fragility. Monitoring and observability people want you to integrate with their tools to see what is going on. Service mesh people ask you to adapt their solutions to baking some of the stability best practices into your application runtime. The answer is a mixture of all these and more.

In this post, let me explore what is likely happening today, and what it might take to improve stability without sacrificing speed.

Interconnectedness is a common attribute of most contemporary architectures. Our systems are an interconnected heterogeneous set of fast-changing and slow changing components. 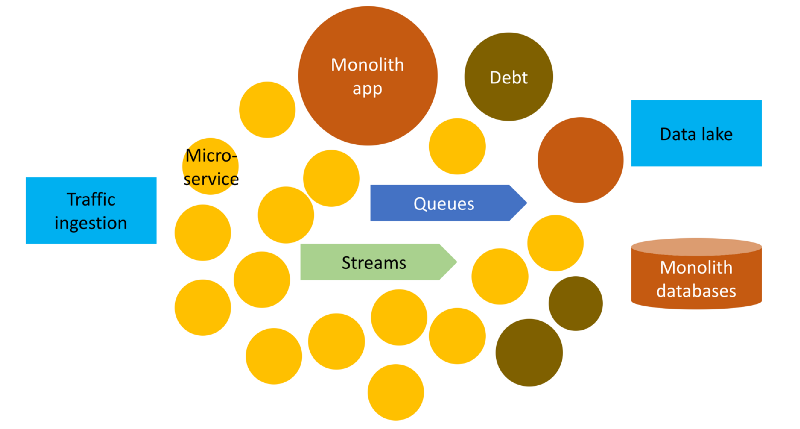 From experience, we can make the following observations of such architectures:

Whenever I participate in incident response, I take interest in observing how the participants reason about what went wrong and how to recover. Discussions on the bridge and incident Slack channels demonstrate some of the above observations. Participants offer assertions about what went wrong, and what should be done to fix. They base it on their own certain, deterministic and causal understanding of how the system is supposed to behave. Some would be right and some would be futile guesses. Sometimes resolutions are quick, and in some cases, resolutions take hours.

With rapid change, new components come into critical paths often. What was a stable path yesterday may have a few new components today with not-yet-well-understood failure modes. This leads to unclear or porous fault domain boundaries.

You may have had confidence till yesterday that a failure inside the fault domain does not cascade outside, and vice versa. New dependencies can erode your confidence quickly. Was the timeout for the new dependency configured correctly? Was that new dependency aware of the new traffic you may be planning to take? Is that dependency soft (i.e, we can still the request albeit in a degraded mode? Or hard (i.e., a fault in that dependency cascades)? You may not have enough time to catch up to answer such questions as the architecture is constantly changing due to high change frequency.

Automate everything is a great slogan. In reality, automation is rarely complete.

There are several reasons why.

First, most frequently executed parts of our workflows get the highest priority for automation investments. For instance, CI/CD investments for stateless apps and services far outweigh similar investments for stateful parts. Stateful parts include your self-hosted databases, caches, queues, streams etc. The rationale is simple. In any given architecture, the need for change frequency is usually higher for stateless components than for stateful components. The usual attitude is to let the in-house expert deal with the stateful parts. “How was that database setup?” — you ask. The answer may be, “We don’t know. The DBA (or name your expert) set it up for us.”

Similarly, if one of your clusters is known to fail 3–4 times a year, would you spend two sprints to fully automate it, or jump into those failures to fix whenever there is a failure? Though the latter is nothing but unplanned work and contributes to the accumulation of forgotten failure modes, Managers and prioritization decision makers often pick the latter over the former. This seems counter-intuitive, but most people don’t work across long time horizons when prioritizing work.

Second, you need closed-loop automation for lights out management of systems. In a closed loop system, an observer monitors common failure conditions and autonomously takes corrective actions. However, building closed-loop automation is hard and time-consuming. Thanks to modern frameworks like Kubernetes, we’re in a much better spot today than ever before to implement closed-loop automation. However, having a solution is different from actually using it. This could be because you invested in your current automation sometime before a solution came along, and you may have sunk enough time, resources and processes to quickly change it all.

Third, the ease of use of cloud services makes it very tempting to create and configure resources manually through cloud consoles and CLIs. We all know it is wrong but do it anyway. As memory fades and team composition changes, those become brittle to change.

Configuration drift is one of the painful consequences of incompleteness of automation. Drift is like tree rot. It happens slowly, one config variable at a time, one hidden assumption now and then, just a few misconfigured alerts, and one more manual tweak here and there. That’s how drift accumulates over time.

Over my career dealing with infrastructure and automation, I’ve witnessed many cases with drift accumulating over a period of time to disrupt planned work, degrade critical services, cause difficult to explain bugs, or long times to restore because a critical team member is not on the bridge and so on. The lesson I learned is to always strive to increase the level of automation but also expect drift. I would plan to measure and monitor for drift regularly, and not blame incompleteness of automation for the failures drift may have caused.

Chaos engineering is not about randomly introducing faults into production systems. As Principles of Chaos Engineering explains, The idea of chaos engineering is to come up with hypotheses, create conditions to test those hypotheses, and then prove or disprove. Through such hypotheses testing, you gain a better understanding of the physics of your system. You help surface hidden and forgotten assumptions. Such understanding is essential to time to restore when failures happen.

However, despite some industry success stories, and even though chaos engineering is nearly 9 years old, its practice is still nascent in the industry. It is not often you would run into a team that says “We understand the value of chaos engineering. So we allocated x% of the development budget for chaos engineering practices”. A more likely answer is “This just isn’t the time to deal with chaos when we’re overbooked and understaffed. We’ll look at it later.”

As a mainstream activity, chaos engineering is perhaps where automation was 5–8 years ago, and experimentation (such as A/B testing) was 10+ years ago. So, what gives?

I see a few reasons for this hesitation.

(In this discussion, I’m ignoring those that that like to treat production systems as sacred that must not be willfully broken. Can’t help you. Sorry.)

First, a lack of confidence of recoverability from intentional failures inhibits the practice of chaos engineering. Would the system survive? What if we end up creating a massive production outage? Do we have the time to deal with the aftermath? Even in organizations that don’t punish people for breaking production systems on purpose, lack of confidence is a blocker for chaos testing.

Second, chaos engineering, when practiced in poorly understood complex environments, can tip the system beyond the point of equilibrium. You may not have the safeguards necessary to contain the effects of a chaos test. An intentional failure can quickly cascade, and lead the system into the zone of instability.

Finally, most enterprises lack dependable disaster recovery environments and practices. The fault domain, in such cases, envelopes the entire production environment across one or more data centers. Consequently, when a chaos engineering test goes berserk, there is no escape pod to fail-over to a healthy environment. Your only option is firefight the failure in place. Who would want to intentionally create a large fire, and then jump to fight it?

Culture of Safety to the Rescue

Stability concerns amidst high change frequency is a new reality for us to accept and adapt to. Like most things, stability consideration is not the sole terrain of any single tool or a practice.

Below are three phases of practices to consider to develop a culture of safety.

Design and build for redundancy: Redundancy helps improve safety. Lack of redundancy impedes your ability to test failure hypotheses, and thus your understanding of the physics of the system.

Pipelines to rollback: Sometimes rolling back suspected change may be the quickest option to restore from failure. Exercise CI/CD pipelines for rollback.

Failover testing: This is an important activity to perform to increase confidence in chaos engineering, and to practice reducing time to restore by way of traffic shifting. This type of chaos testing can be much more valuable than simply turning off random machines in your environment.

Roll forward: If rollback is not possible, rolling a new forward may be your next best option, provided you’ve visibility into key production metrics.

Failover: If you can’t rollback, or can’t push a new fix, then fail-over to a healthy copy. This step takes practice. The investments made during the normal course to failover traffic to a redundant copy will come in handy here.

Postmortem: The amount of time you spend after the incident is more important than the time spent during the incident.

Low/medium performing teams don’t spend enough time after an incident to analyze what happened, to curate and document the findings, lessons learned, and action items; and to follow through those action items in a timely manner. They get burnt out during the incident, and attention drifts away to other things in a few days.

On the other hand, high-performance teams conduct periodic operational reviews to review postmortems and follow up actions. They don’t let go of the post-incident learning phase.

Consider each postmortem as an opportunity to learn and reason about the physics of your systems, and not just as a chore to report the findings.

Post-incident validation testing: Once the fixes are made, validate design and code changes by testing if the system would survive a similar failure. Most available chaos testing tools help mimic a variety of failures. Test it in production as much as possible to increase confidence.

Remember that safety does not mean slowing down. It does not mean batching a large set of changes into big bang releases. A culture of safety means being deliberate of the actions, aware of the production environment, and conscious of customer experience. It requires you to develop an understanding of the complexity and the interconnectedness. The more you understand, the faster you can go.