I’ve been noodling on this post for over a year. I discussed, debated and explained parts of what I write below with several folks during this time. I also changed my jobs this year. From mid 2012 to early this year, I lead a team that built one of the largest mid-sized fairly successful private clouds. I now lead an effort to migrate several large-scale mission critical systems from on-prem enterprise data centers to a public cloud. This transition gave me the time and opportunity to refine and expand the scope of my thinking. So, here is my appeal. Slow down on your private cloud projects, and get out of enterprise data centers as fast you can. You may be shooting for a local optimum with your private cloud strategy, and not the global maximum for the business.

There are very few enterprises in the planet right now that need to own, operate and automate data centers. Unless you’ve at least 200,000 servers in multiple locations, or you’re in specific technology industries like communications, networking, media delivery, power, etc, you shouldn’t be in the data center and private cloud business. If you’re below this threshold, you should be spending most of your time and effort in getting out of the data center and not on automating and improving your on-prem data center footprint. 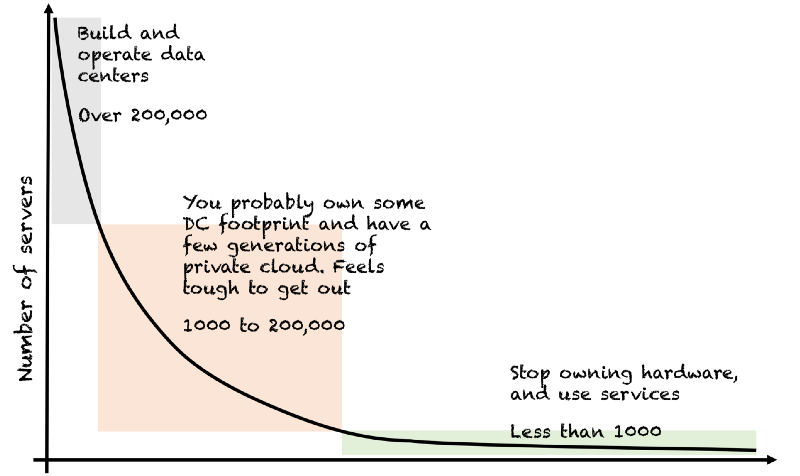 While the overall demand for compute footprint grew across the board in the industry, the number of enterprises that need to build and operate data centers to host that compute has been steadily shrinking. There are multiple factors at play behind this trend. 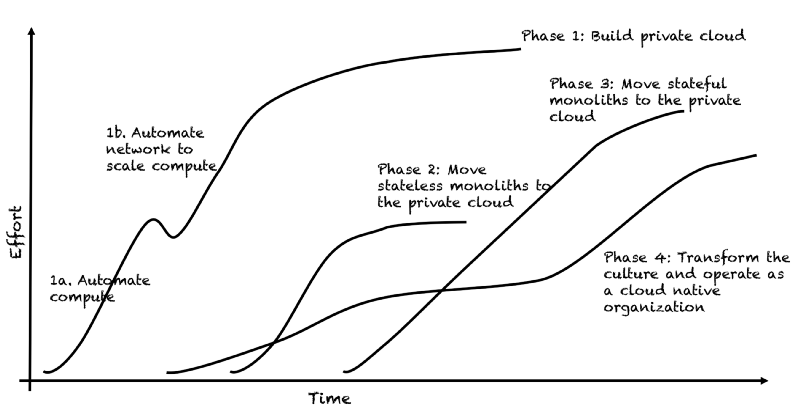 This is a multi-year journey with each phase involving several hurdles and taking years to execute.

Would you start with Phase 1 in an on-prem data center, or go directly to Phases 2 on a public cloud?

The state of infrastructure influences your organizational culture. A modern enterprise running on programmable cloud contributes to autonomous teams, rapid learning, and faster iterations of ideas. Brittle, time-consuming, human-operator driven, ticket based on-premises infrastructure on the other-hand brews a culture of mistrust, centralization, dependency and control.

Say, for instance, a team wants to enable TLS all the way from load balancers to their app servers. Such a team will likely have to deal with networking teams, security teams, and potentially several middle managers to execute the change over a period of several weeks if not months. The same team could execute this change on a public cloud in under a week and move on to the next thing. There are numerous examples like this.

These difference between on-premises data centers and public clouds influence how teams think, plan and execute. These are nothing but attributes of culture.