Monitoring and Alerting for OpenStack

OpenStack is a loosely coupled distributed system. Given the number of moving parts in OpenStack, the particular configuration of an OpenStack deployment, and the underlying layers in the data plane, failure detection and debugging can get non-trivial. In particular, some components like DHCP agents, Quantum/Neutron APIs, their drivers, Nova metadata API, volume backend devices, Swift etc. have higher availability bar due to their involvement in certain flows in the cloud data plane. OpenStack deployments need significant investments in log aggregation, metrics collection, monitoring and alerting for early problem detection and recovery. In this post, I would like to show some of the practices and open source tools that you can use for problem detection and trouble shooting.

To set the context, take a common task like creating a new virtual machine instance. The diagram below shows all the components that must cooperate to bring up the virtual machine into a state that a tenant is able to use. The flow starts from a tenant request for a new virtual machine and ends with the successful completion of the cloud-init process. Boxes with thin borders show the control plane, while boxes with bold borders show components that participate during the boot process and later. In this example, quantum is backed by the NVP plugin, and keystone is set to use PKI for tokens. I’ve ignored the database in this diagram. 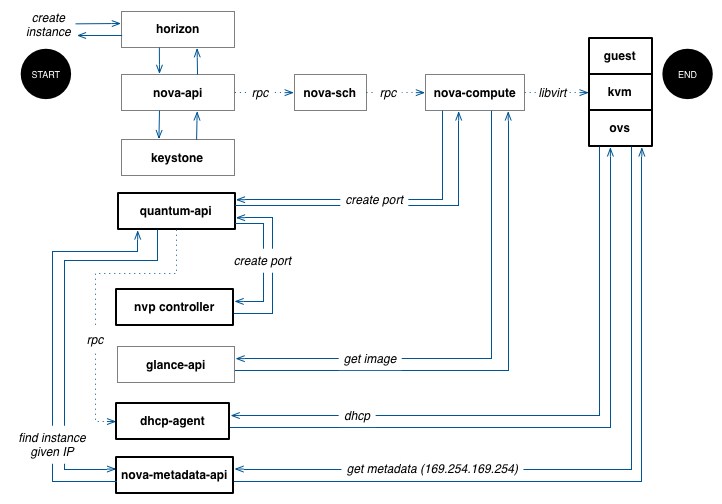 In this flow, a 202 response code from nova API or even a virtual machine with the power state ACTIVE does not actually mean that the tenant got what it asked for. This is true for several other common flows as well.

Fortunately, most of the OpenStack components generate raw signals to debug failures. But it is up to the operator to build a system to collect those raw signals, and process them into metrics to monitor and alert upon.

Below is a diagram that shows common signals and a schematic of how to collect, process and generate useful metrics and events for tracking and monitoring. 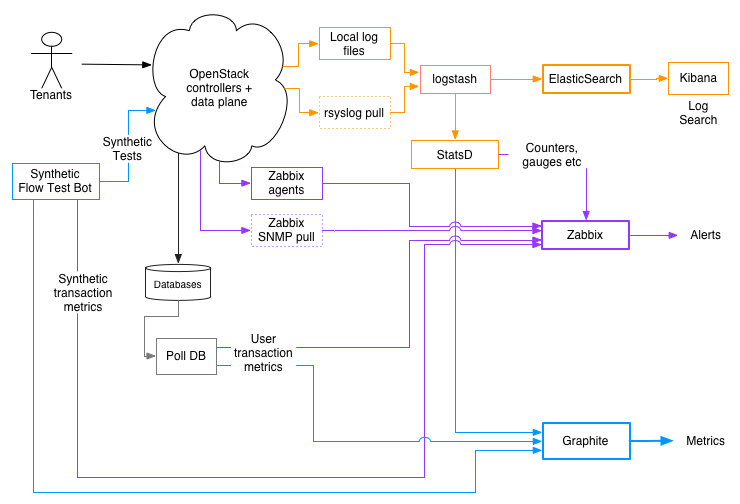 The key signals to look for include the following:

Basics: These include usual signals like process health, restarts, CPU, memory etc across all nodes. In the diagram above, this is done via Zabbix, an open source solution for monitoring and alerting.

Log files: This is one of first sources to look at for most problem resolutions. In addition to detailed trace of warnings and errors, log files in OpenStack include useful information to know how various OpenStack APIs are behaving. For instance, here is a message from the nova-api log.

This message tells you many things:

Having used logstash, ElasticSearch, and Kibana for nearly a year in production in our cloud at eBay, I would not run an OpenStack cloud without this trio for log collection and processing. logstash is quite flexible for log collection and processing. For OpenStack deployments, logstash is particularly useful since not all components follow the same format for log messages. logstash’s grok filter helps normalize various log messages into a format that can be indexed and searched.

Log searching is useful for debugging, but how to mine health indicators like request rates, error rates, latencies etc? This is where Etsy’s statsd comes in. By funneling parsed logs into statsd via logstash’s statsd plugin, you can extract timing metrics, counters and rates from logs. Once extracted, you can send them to a system like Graphite for metrics tracking and graphing, and a system like Zabbix for alerting.

How to extract this information for monitoring and alerting? All it takes is some code to periodically poll those tables, count various indicators, and then write to systems like Graphite and Zabbix.

Synthetic Flows: What we found during a year+ of operating an OpenStack private cloud at work is that the above are not sufficient to help us proactively find issues before our users see them, and to reduce time to recovery. Here is why.

One way to account for these blind spots is to select a few key flows like the ones below that count towards the operator’s SLA, and synthesize those flows with controlled inputs such that you can programmatically assert the outcomes against expected.

Any deviations show health issues. In the schematic above, there is a synthetic test bot that is continually exercising the cloud and writing signals to Graphite and Zabbix.